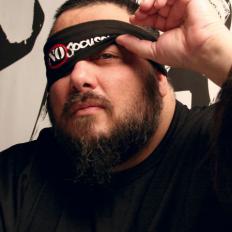 B.D.Foxmoor, born 1967, gets involved with hip hop from a very young age, since 1979 precisely. Since that time on, he starts searching whatever would be linked to this music genre. Active Member is the group created by B.D.Foxmoor back in June 1992, during a Public Enemy’s live show.
Nowadays, the group consists of B.D.Foxmoor himself and Sadahzinia. Furthermore, B.D.Foxmoor also founded Freestyle Productions in 1992, that is, a production team keeping pace with his group through which he could independently release the first ever hip hop album in Greece which bore the name Protest. He had recorded this album in 1993 without having any particular technical means in his service and without any academic musical knowledge. Consequently, he gathered and organised a group of people called Radicals in order to support and feed the whole effort which began spreading. Besides, doing hip hop with greek lyrics was something odd at the time and couldn’t fit with the rest music of Greece. All Freestyle Productions’ releases (always independent ones) were exclusively pressed on vinyl record. From the same label, he released some more records including Active Member’s second LP. By 1995, the group had drawn the attention of record companies and resulting this, they signed a contract with the multinational Warner, being the first greek hip hop group to do so. A few months later, their third studio album called The Big Game was released; making a grand opening of the group in a more wider and large audience. Freestyle Productions doesn’t exist anymore by the close meaning of a company, rather sustains more as a defined group of friends. At the time, B.D.Foxmoor took the decision to name the hip hop that he himself represented in an effort to differentiate it from the one dominated at the U.S. Thus, LowBap was born defining the direct relation that word must have with life.

B.D.Foxmoor is the person around whom many activities start up and evolve: Since 1993, he has widely participated and contributed in the publishing of several fanzines (e.g. Radicalistic, Dream Diary and Praxia). Since 1997, he established the annually LowBap Festival located mainly in the west of Attica but spreads also in the province by special live acts. The festival, apart from the concerts taken place, helps with the communication and feedback between the audience and Active Member and other LowBap groups and also informs about the hip hop history and background so that the codes would be assimilated and the clichés could be rejected. There have already been organised a dozen of official LowBap Festivals while many more of a smaller range have taken place in the province.

By August 1998, Active Member launched Dream Diary, their radio show programmed on Rock FM which has made history in the radio world with its 73 continuous broadcasted shows. Relaunching again on April 2003 at En Lefko FM, the show has his first broadcoast named, page 74. After six months it was once more stopped besides the big auditory it had. In 2000, the book by the title of Blame it on the Fire was published by Ellinika Grammata Editions containing lyrics written by B.D.Foxmoor from 1993 until 2000 and already making four reprints. In the same year, the first LowBap Documentary was to be released by Warner. On 5th of February 2001, B.D.Foxmoor launched the first ever hip hop record shop in Greece located in Perama holding the name Intro. By autumn of the same year a studio made with great care by B.D.Foxmoor and his father came to life bearing the name Perasma in order to give shelter to his own machines, records and ideas. Just before the end of 2002, he inaugurated also in Perama, the bookshop named Timecrack, a both musical and political one. Through Timecrack, in 2003, he released a small book with his thoughts and named it From Here and There. B.D.Foxmoor is responsible of the soundtrack of a long feature film called Bar as well as of the music of a short one called The Cement does not Feel Sorry. He has also taken care of the score of the film Still Looking for Morphine, distinguished at the International Film Festival of Thessalonica. As a matter of fact, this film has recently been included in a list contacted by a valid british film magazine along with the 75 movie-diamonds of international cinema. During 2005-06, B.D.Foxmoor created the music destined to a theatrical play called Lost in the Dream based on Lorca’s Bloody Wedding and casted by Sin Athena theatrical team. During 2007, he recorded the soundtrack of a Stelios Couloglou documentary called Hitman: Confessions of an Ecomonic Killer, screened at the International Documentary Festival of Thessalonica. Along with the lowbap community he initiated the foundation of a cultural association called Praxia. Various events, talkings, discussions, exhibitions and screenings were held there while a lending library would also have been in use. In April 2003, along with Sadahzinia founds 8ctagon, that is, an independent label which has already developed strong relations with well known artists outside Greece and has achieved by now a number of more than 40 releases in Greece in various formats such as CD, DVD, vinyl records and others. During summer 2010, B.D.Foxmoor brought to life his own theatrical play named Common Place, participating in Athens Festival.

B.D.Foxmoor has participated since 1993 on the release of 120 record albums. He is responsible of the music production of 1000 tracks released on albums while he has written lyrics and rapped in most of them. Active Member’s 16th successive studio album called At the extremity of the mutes as well as his own 14th solo studio album are in circulation. He appeared in more than 600 live shows and concerts in Greece as well as in England, Wales and Germany. B.D.Foxmoor and Active Member leave their trace and have a catalyst action, along with their discography, live acts but also with more spontaneous initiatives undertaken, in the socio-political matters that they feel being unfolded around them. At a time where reason in general, not just the political one, can’t easily find an appropriate framework to be expressed, B.D.Foxmoor looks way ahead, expands his sound even more always keeping in mind his values and LowBap’s meaning, that is, life and word must be keeping in pace. 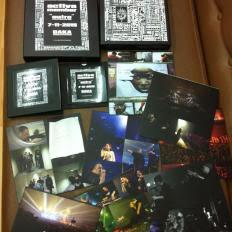