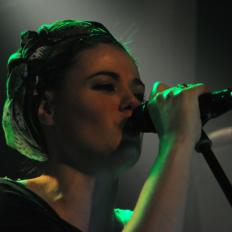 Sadahzinia (Yolanda Tsiampokalou) is part of the team of Freestyle Productions since 1994. Actually, she is the first woman ever to be actively involved with hip hop music in Greece.
The name ‘Sadahzinia’ derives from the words sad, (j)ah (meaning creation in Jamaican) and zinia, the flower. (According to a Caribbean myth, the flower zinia is a sad one but when it hears music, blossoms and life changes for ever. The word Sadahzinia is wordplay originated from this myth.) Since 1994, Sadahzinia participates in Active Member concerts (Active Member released the first hip hop album in Greece and is still the most influential and creatively active hip hop group in the country.) She is also collaborating with the group in studio sessions playing keyboards, percussions and  rapping. She often appears alone having her own live performances where she presents her solo studio albums. Her first three albums were all released by Warner. All these years, apart from Active Member and other LowBap groups, she has collaborated with a wide range of artists. Names such as Waldemar Bastos, Socratis Malamas, Maria Papanicolaou, Killa Kela, Mixologists, Adam Fuest, Chris Hall, Oliver Wilson, Winston Irie and Dynamo Dresden have all worked with Sadahzinia either on stage or in the studio. In 2003, Sadahzinia officially joins the group of Active Member, a thing that makes her look into the future with even more responsibility and possitivity.

She retains a healthy dislike for the so-called ‘rules’ which define the acts of person engaged with hip hop. She writes fairytales for children for example. She mainly cooperates with Castaniotis Editions while one book of hers has been published by Electra Editions. For 4 years, she was writing recipes for children in a newspaper having also the column called Childwrites while for 2 years had a collaboration with Contemporary Kindergarden magazine where she was writing theatrical plays destined for children. She organises a series of events about the presentation of her fairy tales in various places such as bookshops, schools, the children’s museum, cultural spots, libraries and others, where she presents an original theatrical play written by herself enabling the children’s participation. Meanwhile, she also translates books for children and adults.

During the summer of 2003, a theatrical play of hers had been presented at Petras Theatre, in cooperation with the Municipality Of Petroupolis; The Wizard of Fire was coming into life accompanied by a live symphonic orchestra and a dj while Gerasimos Gennatas held the role of narrator. She is also responsible for the publication of Active Member frontman’s two lyrics books. The one called Blame it on the Fire with lyrics written between 1993 and 2000 and some unpublished photographs pressed by Ellinika Grammata Editions in 2000 having already done four reprints, and the second called Blame these too on the Fire containing lyrics from 2000 and up until 2006, published by ΚΨΜ Editions in 2006. For a few years, Sadahzinia was writing on a weekly basis at her personal all-paged column called Every Monday, a Strange Stroll in Eleftheros  Tipos newspaper. Back in the year 1999, she obtained the English Literature Degree of Athens University. She is responsible for the archive material both of Freestyle Productions and 8ctagon such as interviews, posters, photographs, various articles, listings etc. In 2003, Sadahzinia along with B.D.Foxmoor founds 8ctagon, that is, an independent label which mainly undertakes record releases but also enables in visual material production as well as live concerts organisation. The label has already collaborated with artists living abroad. Therefore, through 8ctagon, her 4th solo studio album had been released which went under the title of The buzz and the doings back on September 2003, while her 5th one came out on April 2006 by the title Breath of a Stone, and by 2010 Sarma was released. In the meantime, she has released the From the faults of our making and At the extremity of the mutes studio albums as part of Active Member which is at the moment found in the studio recording their forthcoming album named Arsenali.
You can find further information, news and photographs about her at www.sadahzinia.com