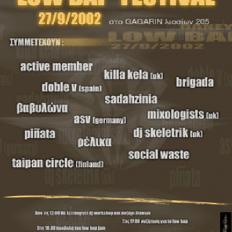 The 1st European Lowbap Festival was finished two months ago. Since then, other obligations have arisen and some new festivals are in train to be organised. Nevertheless, on the 27 of September 2002 we lived a lowbap feast. Therefore, I will try to describe in words a little bit of the feeling and atmosphere of that night so the people who couldn’t attend to, can get an idea about it. I myself was stressed. I confess it. The effort of tuning people speaking another language and many of them had arrived in Athens after the beginning of the festival, so that everything could work perfectly, was a quite stressful one indeed.
Luckily, we had been organised in groups and the necessary responsibilities were undertaken by each one of us. Since noon, Optimas Prime from Wales was responsible for the DJ workshop. They were making various djing tricks at the four turntable decks installed at the left of the stage along with ‘ours’ dj Booker. At the videowall behind them, Animatus VJ team was experimenting some visuals drawings or entire videos. Pinata entered the stage around 8 o’clock at night rapping three tracks of them as they were followed by Relika. The microphones were constantly changing hands. (The sound diffused into Gagarin, where the festival was held, was UNACCEPTABLE in spite of all the work done to be sufficient. Any possibility of improvement was non-existent. But we didn’t bother! Let the fact that the owner of Gagarin had the brilliant idea of charging an entrance ticket. Sorry about that guys, but sometimes not all things are being controlled by us.) Social Waste from Crete was next, presenting four songs. The audience was singing along all the time during the perfomances. We did the same backstage (in hell with the stress!)

Afterwards, it was the time for ASV, refugees living in Germany to come forward. More precisely the group consists of three Greeks, a girl and two boys, a Kurd and a guy from Turkey, best known to us with the name Sezen. Later on, Vavilona got up on stage followed by Sadahzinia and Brigada. A good time was rolling on and was getting even better. Assalti Frontali and Colle der Fomento, both from Italy, entered the stage having a dynamic presence and in spite of the language barrier, the people were well responding (Berlusconi, va a far culo!) The time for Killa Kela from England had arrived, who is the best performer of the world in beatboxing and mouth-scratching. Killa Kela presented a very impressive show for an hour and we weren’t able to believe that all those voices were coming through the same person at the same time. Along with him, Mixologists could be found, a dj team from England with worldwide distinctions as well as Skeletrik also a dj from London. I couldn’t forget of course mad-Normski. He was playing drums at the edge of the scene, was dancing and making some other crazy staff. Suddenly, Killa Kela spontaneously called Sadahzinia on stage and Sadahzinia on her turn called B.D.Foxmoor. The reason? Killa Kela just wanted to perform a mouth-beat so they could rap on it. (More precisely, they freestyled ‘Another lie’).

Afterwards, a nice atmosphere from both Trinidad and Camden arrived upon the stage as Winston Irie entered the scene. Winston knows well of the stage, the microphone and the audience and when he is up there you can’t imagine him being anywhere else! Later, B.D.Foxmoor’s round had come to get on stage presenting songs from the, till then, unreleased record album of his. B.D.Foxmoor filled all the missings going up and down the stage. By that time, people had long been on fire but he didn’t want to enjoy it by himself so he rather preferred calling everybody who passed through the stage that night to join him. What an excellent moment! We all hugged and were singing ‘May nobody care’ and our foreigners were all participating in the most unexpected way.

Low Bap and hip hop had redefined the codes perceived and declared ‘present’ in the most beautiful way. May we meet next year as well, at the next festival, more widely and massively. LOW BAP. 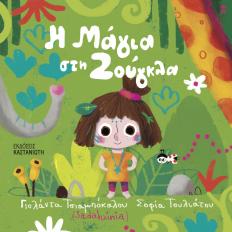